I offer a white tulip to the white cat on the fifth-floor windowsill.
A poplar leaf, still green, floats on your black pool at 3:30 a.m.
While he slicks back his hair behind a tangle of ripe raspberry bushes,
she dabs her wrists with patchouli under the rising sliver moon.
Dawn eases into the picture near the dumpsters behind my high rise.
Your lost mirror shades, a souvenir from one of the bicentennials,
reflect the coppery light and closed barnacles along the rocky coast.
The suburban local breaks down on the hottest morning of the summer.
(On the warmest night of the winter, a misty and amorphous night
when he's approached on the sidewalk by each person's damaged psyche,
she sits in a folding chair beside her 93-year-old great-aunt.)
If I pull over at a roadside vegetable stand in your final county,
he will forget to ask the assemblage at her Latvian friend's house
about Joseph Cornell, the most famous inhabitant of Utopia Parkway.
I'm reading an amusing religious pamphlet, from Jews for Jesus,
instead of listening to the cobblestones rumbling during each backwash.
Your lighthouse is being toured by Steven Fratello, who requested
Darlene Love's "Today I met the boy I'm gonna marry" on all-night radio.
Among factories converted to warehouses and shady luncheonettes,
she laughs and raises hell in a lime miniskirt and stiletto heels.
Overhead, the clouds awaken from their long nap above the cool harbor.
I'm waiting in the back seat of a parked car with the windows down.
Your horoscope wouldn't have called for stoopball this afternoon,
but stickball at Marshall School, charburgers and Napoleons at Don's.
The hairless insides of his thighs after sweating.  Her brown paper bag.
For a change, I don't recognize any of the names in the obituaries.
You enjoyed riding in the front passenger seat a little too much
to crave the smoky darkness in the back room of Rod's Cocktail Lounge.
Cheap commercials, populated by retired Los Angeles Dodgers greats,
dominate the late-night TV in his mediocre motel room in Encino.
The steeple's shadow crosses the advice columns she reads religiously
on a concrete bench in Corporal Francis Xavier McGilligan Square.
As gasoline fumes from the Exxon pump ravish my sense of smell,
chickory and daisies bend their heads beneath the strong south wind.
No memory of your short life is too trivial to overlook any longer,
much less the handshake he spurned, the prophetic postcard to her. 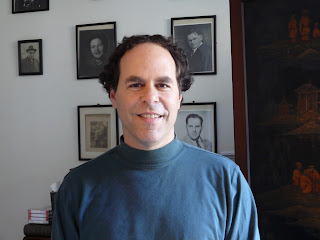 Michael Ruby is the author of five full-length poetry books: At an Intersection (Alef, 2002), Window on the City (BlazeVOX, 2006), The Edge of the Underworld (BlazeVOX, 2010), Compulsive Words (BlazeVOX, 2010) and American Songbook (Ugly Duckling, 2013). His trilogy, Memories, Dreams and Inner Voices (Station Hill, 2012), includes Fleeting Memories, a UDP web-book, and Inner Voices Heard Before Sleep, an Argotist Online ebook. He is also the author of four Dusie chapbooks, including The Star-Spangled Banner (2011), and the co-editor of Bernadette Mayer’s collected early books, Eating the Colors of a Lineup of Words, from Station Hill. A graduate of Harvard College and Brown University’s writing program, he lives in Brooklyn and works as an editor of U.S. news and political articles at The Wall Street Journal.