5
soundsight a-
rose/ itself an ear among others/ reared on breathsong/ calls “Schnell,
schnell,” you’ll go rattling out that canal/ of word’s work thieved –
shuffled off pages/ blackened under nails/ earthwards – kin and loam

6
The E N D of it – this/ hand pushes pen over paper – the clock that
happened in his poems happened in her poems happened in these
poems too – inexorably this/ feeling of coming in of coming/ into
a room where she sits down beside you – redresses herself – let go
of this/ “my” this – you think – Alice turns to you and says so. 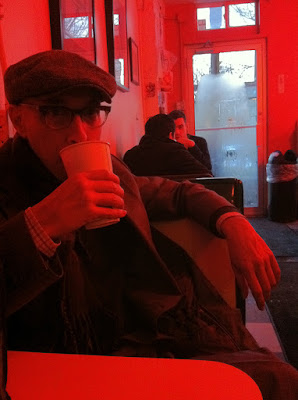 Mark Goldstein [photo credit: K. Hill] is the author of three books of poetry published by the award-winning BookThug: Form of Forms (2012); Tracelanguage (2010); and After Rilke (2008). His poetry and criticism have appeared in both trade and limited editions as well as in periodicals and journals such as The Capilano Review, Brick, Open Letter and Jacket2.

Goldstein has facilitated workshops at the Toronto New School of Writing, SUNY Albany, and lectured on translation at George Brown College, York University, and in Paris at the École des hautes études en sciences socials.