Tuesday poem #215 : Jacqueline Valencia : Skin is the livery of the Goddess


Jim stood full of emotions
in the lushness of Magwood Park
reaching out to the skies.

Becalmed, he looked down at the
dandelions, the ragweed
blooming up, choking roots, taking over his space.

Jim decamped as clouds passed
darkening a view with the undertow of wind
enlivening movements he could not make on his own.

Spying on the woman he once knew carnally
across the street, drapes open, anchoring her anxiety
in a dance, a liberty he was circumscribed to stomach.

Rapid zipping up electric blue sphere
cast the Circle with sword and athame
speeding up karma solipsism to keep afloat.

He was a green ash, once a man,
now squirrels sex up, engorging themselves
with nuts in his trunk, a better home than procreator.

She, the woman called Babylon in the windows
wore a crown of life affirmation beyond abuse
matriarchal underworld form agency due with the flick of her wand.

Weeds, garbage greenery, critters all over the arms
reaching up decorating a powerless Jim by living
filling him up with insidious festering numbness.

The sun conjoined Craft and root
moon feminine justice, a truth chaos
sets daily on the corner of Marks Road and Varsity. 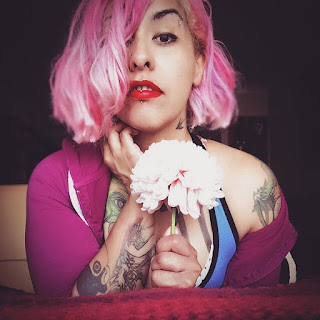 Jacqueline Valencia is a Toronto-based writer. She is a senior literary editor at The Rusty Toque. Her debut collection There Is No Escape Out Of Time is out with Insomniac Press.