The bomb itself, rather than we who made it, largely invented the characteristics of being softened by abrasion, being wounded, flayed, our eyes melted; and from this what came to be beloved was the gloss and fear of children in general.

Fear itself, rather than the flayed concrete which banked it, comprised all our houses; and from this surprise what came to be a shelter was cruelty toward our enemy.

The moon itself, its greens, the water casting back and forth for its owner, these largely absorbed our fears of being cruel and inhuman; and from this sanction we came to wave our children forward through the glossy bomb-soft grasses.

The war itself, rather than the children who loved it, largely weathered the white flags, and we ourselves weathered the war; and from this window into our power we came at last to see our flags as white with triumph, in a greenlit glossy childless night.


[This poem riffs on syntax borrowed from John Dower's Embracing Defeat: Japan in the Wake of WWII.] 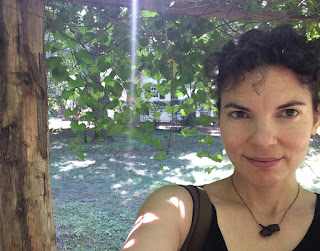 Collier Nogues is the author of The Ground I Stand on Is Not My Ground, selected by Forrest Gander as winner of the 2014 Drunken Boat Poetry Book Contest, and On the Other Side, Blue (Four Way, 2011). Her work has been supported by fellowships and grants from the MacDowell Colony, the Ucross Foundation, Vermont Studio Center, and Fishtrap. She is the 2016 Writer-in-Residence at Lingnan University and a PhD Fellow at the University of Hong Kong, where she studies contemporary poetry’s response to US militarization, particularly in the Pacific. She also she co-edits poetry for Juked and curates Hong Kong’s English-medium poetry craft talk series.