Tuesday poem #416 : Tom Prime : Everyone is Taking Pictures of Me

when converted to film, my wasps darted a portcullis on unwatched
tongues and like leeches, leaned into a palm of miniature    locks that purged
photons

reminiscent of the data structure of hovering
arroyos, though it was an aspect of a dog licking the tender    hairs; nonetheless

those dim sweltering lightbulbs, like deer, sitting in a one-
dimensional locus alongside a dog with trench

mouth, could not muff
the most basic of paradoxes and thus were the ligamental of

that mother of the morning who had awoken a clairvoyant and, gleaning
the hearse, had quit her     job in the vizard of foaming
stumps. 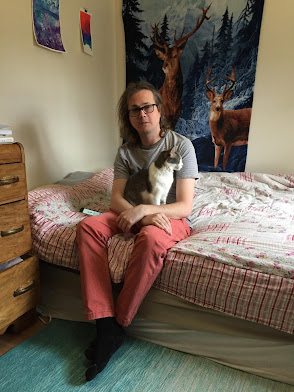 Tom Prime is in his second year in the PhD program at Western University in English. He has an MFA in Creative Writing at the University of Victoria (Specializing in Poetry). He has a BA at Western University. He has been published in Brave New Word, Carousel, Ditch, Fjords Review, The Northern Testicle, The Rusty Toque, Vallum, and Watch Your Head. He has two poems accepted for forthcoming publication in Lana Turner Journal.

His first chapbook, A Strange Hospital, was published as a Proper Tales Press. His chapbook, Gravitynipplemilkplanet Anthroposcenesters, was published by above/ground press. This along with the two Serif of Nottingham chapbooks (Birds are the birthmarks of flight and Throat Fixtures: The Almanack of Dazzle) are collaborations with Gary Barwin. He has a forthcoming mini chapbook on Blasted Tree Press.

His collaborative collection of poems written with Gary Barwin, A Cemetery for Holes, is available from Gordon Hill Press.

the Tuesday poem is curated by robmclennan