an ekphrasis on London From Greenwich Park,
by J.M.W. Turner

I see a clutch of red and fallow, all
enclosed off-canvas. Day chases night
with a can of black and tan,
while jumbo jets float
in the pink of a bad year, caught
in marmalade above Gatwick.

Sweltering Brits! Long grass tamps
down the slope. Robust regard
for parks but sold out of cornettos.
Again and again explained a drive to flee
for Kent, Galloway, Somerset, the din somewhere
waves crash into stone lions’ cliff-carved maws.

Polyphemus is in the next chamber, his father stirring.
The rubber map of an old port's streets I leave
as giants grind down to enjoy feeling
a city squish beneath heel. Fairy-rings
are sprouting around Saint Paul's.
Underwater tunnels are the last damp place, cool,
the Thames’ old bricks quivering green jelly.

The point of dogs to Turner’s at-bay stags.
The roars are hollowed,
weather no polite conversation
when an age of aftermath arrives. Two centuries on,
Greenwich, I didn’t mean it. Straw hats,
subscription lawn chairs should take note. 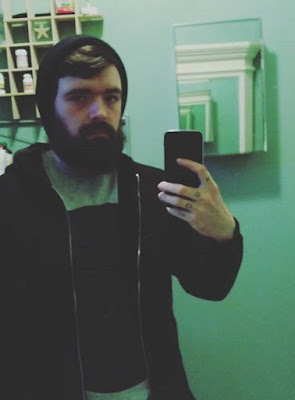 Joel Robert Ferguson’s poetry has appeared or is forthcoming in numerous publications, including Contemporary Verse 2, Lemon Hound, The Columbia Review, Prairie Fire, and The Capilano Review. Originally from the village of Bible Hill, Nova Scotia, he now divides his time between Winnipeg and Montreal, where he is pursuing a Masters in English Literature at Concordia. His first book of poetry is forthcoming from Signature Editions in 2020.