I am fast. Listen, the team’s mouth moves

from across the field: hustle. Blood-

shot, their mouth is saying

it is out of bounds. I have

are letting out long lines. Blood-

rushes to their mouths. If I look

& won’t have missed it, I will have paid attention.

Many times are lost in time

beneath the dark red-clay. So they told & the joke goes:

he threw a white stone in

a red sea. The oarsman had a white stone

& he threw it in the sea. When it comes back

to his hand what color will it be?

It is all gums.

shot and I didn’t pay attention.

Coach has his playbook, it is

red-streaked. His mouth is where

the cardinals are leashed. It is a stone’s

throw away, and believe me, really:

red is the pigment of cardinals unleashing.

I will go back.

I will hustle back.

My legs, they blend and kneed.

Coach’s playbook is pouring something.

Coach’s playbook is in his hands.

He washes his hands off, he gets

shot, I am so fast, on a breakaway.

Out-of-bound, I am so fast,

the pigment it’s all over. 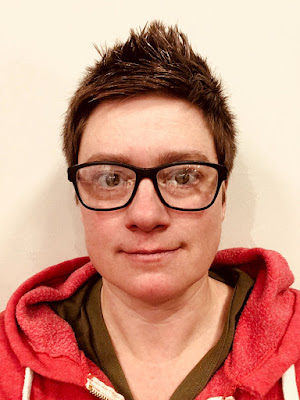 Lauren Haldeman is the author of Instead of Dying (winner of the 2017 Colorado Prize for Poetry, Center for Literary Publishing, 2017), Calenday (Rescue Press, 2014) and the artist book The Eccentricity is Zero (Digraph Press, 2014). Her work has appeared in Tin House, Colorado Review, Fence, The Iowa Review and The Rumpus. A comic book artist and poet, she has been a recipient of the Sustainable Arts Foundation Award, the Colorado Prize for Poetry and fellowships from the Iowa Writers’ Workshop. You can find her online at http://laurenhaldeman.com