I was going to write a poem about three things.

I forgot what they were.

An ice cube fell out of the freezer and slid across the floor.

My dog ate it.

I am avoiding talking about something. 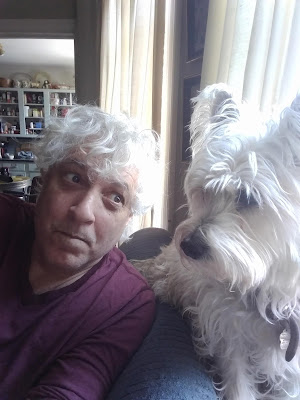 Stuart Ross is a Canadian writer and editor. He is the author of 20 books of poetry, fiction, and essays. His most recent books include the novel-in-prose-poems Pockets (ECW Press, 2017) and the poetry collection A Sparrow Came Down Resplendent (Wolsak and Wynn, 2016), which won the Canadian Jewish Literary Award for Poetry in 2017. Other titles include the poetry collection A Hamburger in a Gallery (DC Books, 2015), the novel Snowball, Dragonfly, Jew (ECW Press, 2011), and the story collection Buying Cigarettes for the Dog (Freehand Books, 2009). Stuart began his literary career by selling his self-published chapbooks on the streets of Toronto during the 1980s, wearing signs like “Writing Going To Hell: Buy My Books.” He was the 2010 Writer in Residence at Queen’s University, and has taught writing workshops across Canada. His poetry has recently been translated into French, and other translations, into Nynorsk and Spanish, are in progress. Stuart lives in Cobourg, Ontario.