Descriptive of a genetic lineage.
I am my father and so too feel the pull of the world not-given

though I am not working on empire.

A tendency to waste the mornings.
Genetics have nothing to do with it. My grandfather died on March 30th, it was his heart,
it’s a genetic thing, and today I spent it in the sun, hungover.

Return to the site of the unborn.


The repetition of the object confirms the bare fact that it exists somewhere.
Someone has made it exist and thrust it in our faces,
goddamnit.

A preference for the soft things [post-coital or otherwise],
and the doing of the thing is a praxis,
is an exercise in morality, inheritance of a genetic code:

Coded, the object repeats
[daffodils bursting up through the snow] 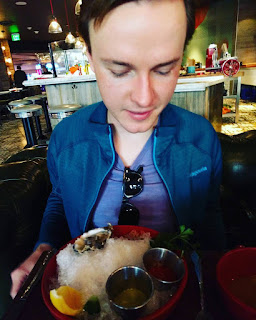 Michael Martin Shea is the author of the chapbooks Soon (Garden-Door Press), The Immanent Field (Essay Press), and Comparative Morphologies (out very soon with above/ground press). He is also the translator of Liliana Ponce’s Diary, new from Ugly Duckling Presse, and the managing editor of the Best American Experimental Writing anthology series. He lives in Las Vegas, Nevada.