her hair turning
to snakes and her hair

giving birth to the Centaur
with Neptune riding

in a chariot drawn
by four sea horses

(“Hippodames”)
a bunch of false

I.e. it would be easier
to number the stars
(“eyes”) than watch

the tragedies caused
by deadly arrows, easy
plunder, the masses

assaulted by a master
deceiving (“fayld”) those
looking on. Happiness,

blindfolded by tradition,
shoots at random (“randon”)
the peacock, the goddess

of the rainbow, or lovers
all animated so lifelike now
to be torn and splintered. 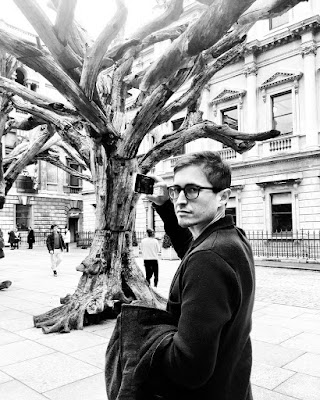 Andrew Wessels currently splits his time between Istanbul and Los Angeles. He has held fellowships from Poets & Writers and the Black Mountain Institute. Semi Circle, a chapbook of his translations of the Turkish poet Nurduran Duman, was published by Goodmorning Menagerie in 2016.  His poems and translations can be found in VOLT, Witness, Asymptote, Tammy Journal, Faultline, and Colorado Review, among others. His first book, published by 1913 Press, is A Turkish Dictionary.