It all got switched a bit from what it was before:
tits still existed in the world untouched, unlicked,
undreamt, and I couldn’t see them any better
or into the infrared any better and I could see
that even here I could be hunted or I could hunt,
these were the passageways that were open to me
and like Frost said, that most people misunderstand,
there was no difference in it really, that I could still not
understand the language everyone else was speaking,
but that instead I had learned another, that of the future
governors and the alien that hunted them, and what a man
meant, and what a hand meant on a thigh,
that by now I had consumed so many films like this,
the whole Schwarzeneggerian canon, I no longer
questioned them. Had I ever? Well, in Commando
when he Frisbee-throws
the sawblade that scalps the dude, that seemed to me
just a touch implausible, even at thirteen. But these scenes
meant something, operating in my interior—and you?
were you too bewitched by these ballets?—and in this way
could we be for a moment together in the dark? 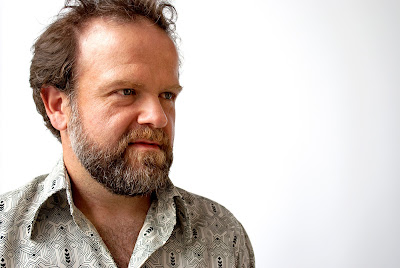 Ander Monson is the author of six books of nonfiction, fiction, and poetry, most recently Letter to a Future Lover (Graywolf, 2015). He edits DIAGRAM, the New Michigan Press, and Essay Daily, among other projects, and directs the MFA program at the University of Arizona.