Post-reef pre-incanted post-laughter pre-blue-fin-streak-near the fissure post-nectar
I counted on the representation of nectar I counted on being able
to suck the nectar out and taste it and thereby represent what I had consumed.
This is the part where the people break up into parts and lose the galaxy.

“Each time we remember something we change it.”
I counted on the representation of coral growth through goggles.
The fact that we can remember the swim changes the fact of swimming it.
A sculptor forms stone sculptures of people in the reef, and the people in their

snorkeling gear float above the sculptures, sculpting memories of themselves, afloat.
This is the part where the cost of losing favorite stones flickers.
This the part where the galaxy hosts yellow beaked fish.
I counted on the parts of myself counting people whole as reefs,

counting pocked orange homes, counting undersea gravestones.
I heard myself say you and you were there.
First, I counted everything, then I counted only the ones with yellow flame flickers
over their fins and signs of lip-streak.

Pre-nectar pre-coral post-war post-forward pre-ambrosial post-memory
I counted the passing saucers─yellow tang─ I sang to myself underwater.
This is the part where oblique people hold their breath and fail to count.
Between incantation and report, what lives in gutted coral,


─after photographs of sculptures by Jason DeCares Taylor, and conversations with the former 13 Hats (quote on memory, Anna Daedalus) 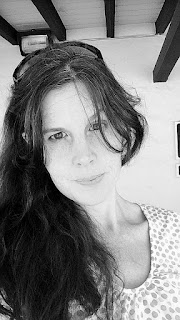 Endi Bogue Hartigan is author of Pool [5 choruses] (Omnidawn, 2014), selected for Omnidawn Open Prize, and One Sun Storm (Center for Literary Publishing, 2008), selected for the Colorado Prize for Poetry. An interview on her work recently appeared in Jacket 2, and recent poems have appeared in the anthology February, the Ostrich Review, Picture Sentence, and New American Writing.