The less famous of the ground sloths. Not like that brute
Megatherium. So all about their bodies, being so huge.

But the Shasta? Well, they’re famous too. How do you think
the soda got its name? Their effervescent personalities, vivacious

in their molasses moves. Yet slash of claw could cut a big cat
to the bone. At first sign of a predator they stand tall,

protest the onslaught. They get defensive, but it’s okay.
After the fact lounge in long grass, rip into cacti.

They would eat anything: spicy, saucy, prickly.
Dream guests at dinner parties. They make slow digs

with prehensile tongues, mock the cats not quite quick enough
to get them with paw swipes and mad jaws.

Their ash blonde bodies loll, burst with energy
from the inside. Shasta, still a soda, less popular. 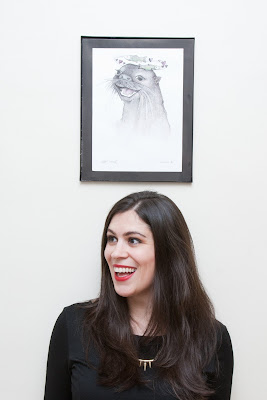 Dina Del Bucchia is the author of Coping with Emotions and Otters (Talonbooks, 2013), Blind Items (Insomniac Press, 2014), and Rom Com (Talonbooks, 2015), written with her Can't Lit podcast co-host Daniel Zomparelli. Her short story, "Under the 'I'," was a finalist for the Writers' Trust RBC Bronwen Wallace Award in 2012. She guest edited the Humour Issue of Poetry Is Dead magazine and is the Artistic Director of the Real Vancouver Writers' Series. An otter and dress enthusiast, Dina lives in Vancouver.