Ball In and Out of Play: You were the tiny girl I couldn't see except as a hand held in your didi's hand. There in the room of the enormous wood desk and over-sized leather-bound book. You were the little girl in blue jacket and broken sandals (it was December) whose crib sat near the door of a high ceilinged room. You were the dour girl, the smelly girl, the girl who refused to smile for visa photos. The next morning you kept throwing a long-stemmed fake flower at your new brother. You never missed with either hand.

Offside: When you're young enough, there's no offside rule. A smart, immobile kid can score at will. When you're older, you dare not pull ahead of the crowd. You insisted on operating in English before you could utter more than a few words in it. On the phone with your sister, a year older, neither of you spoke the language you still remembered; the silences were all English. Second silences.

Scoring: The ball came off your left foot and curved, almost against nature, into the side of the net. You watched Bend it Like Beckham dozens of times; at first I thought it was only soccer that drew you in. Your legs and arms were scored with scabies; giardia doubled you over at dinnertime. The first bath I saw you take—Kathmandu's cityscape laid out behind you—you stood in the tub pouring warm water over your head. There was economy in your movements. Now you mark me, tell me how much everything costs.

Throw-in: In and out are metaphors, but first they tell us to stay on one side or the other of a line, then not to lift a foot, or throw to the side. You threw up at the top of a Rocky Mountain into a pink Colorado Rockies cap. It was the altitude. Now it's the attitude, all pointy and jagged, the sun's eye just glinting around rock formations. You who learned sarcasm from me are now my tuition in it.

The duration of the game complicated by stoppage time, or over-time, or penalty kicks, whose purpose is to save time. If you're in the zone, then I'm on the sidelines. If you achieve a meditative state while running the field, then I'm implicated in time's whiplash. If time stops for you, it cannot for me, your spectator, soccer mom, driver, fan. Ask not for whom time stops, it stops for free kicks and yellow cards.

Fouls and misconduct. “Did I just see her lay that girl out?” asked the dad who could see the left corner from the midfield sideline. It's the second foul that gets caught. They were telling their players to kick us in the shins, you said after one game. I've known your narrations to be reliable and un-, to be angry and joking. I've known you to use your shoulder, but most of all your head. You hit a header in the net.

Referees enforce the 17 laws. Maui refs enforced Maui's laws. You were laid out in the penalty area (area chica), the Makawao wind knocked out of you. No card no foul. A foul against an Oahu player on the other field turned into a penalty kick for the Maui team. To define “justice,” factor in tears of little girls, their coaches' screams. To define “justice,” consider how experience and memory alter us.

Step-over move. At game's end you analyze, say what team is good, which over-rated, what player had a good game, who will never improve. The heat in your voice diminishes. I call you Radish, your grandmother Fruit Bat, your father Jumping Bean; your brother uses a soft “a” where a hard one's needed. Rad, Radish, Radishnikov, Radhika the Destroyer. I do NOT like #46, said an opposing player beside the parking lot. She's my daughter, I say. I hear your name at school, at the mall, the grocery store. You're the one with names, and I am your mom.

From amazon.com you can buy a Pele-autographed Limited Edition Artist Proof Lithograph (Limited 72 of 120) hand signed both by Pele and artist; Pele is the volcano goddess, the one who makes the land on which your fields are built. Waipio is near Waipahu is near Waianae. In Madrid, where Beckham played, you fell in love with a painting by “Pisaco.” We traveled to the Reina Sofia to see the real thing. Walk, take subway, walk, hike up cold stone stairs. And there she is! “Mom,” you said in a side volley, “I need to go to the bathroom.”

Nutmeg. In Mexico you sold paper towels in the bathroom of the bar where we held our readings. In Mexico you learned to love sopa Azteca or Tortilla Soup. When you were four years old and Dad said he was making tortillas for dinner, you panicked. Tortilla is our cat. The difference between a noun and a name, I thought, between a being and the word we place upon it. You are Radhika, wife of Krishna, and there's a song about you in Nepalese. Incarnation of Lakshmi, goddess of wealth, fortune, and the embodiment of beauty. That's from Wikipedia; wiki means “fast” in Hawaiian.

Arsenal.  In north London, 1980, a conductor kept me on the bus, my pound notes unchangeable, because football fans were flooding the streets. My trip was all stoppage time til she had the change and I got off in the City. That was 20 years before we had our first photo of you in a red dress, before our first mother-daughter kiss, awkward as any. Yesterday, your favorite player left Real Madrid to sign with Arsenal. Mesut Özil: Turkish-German, as hyphenated as you, as me, as all of us who live between first and last whistles, before time is finally called. 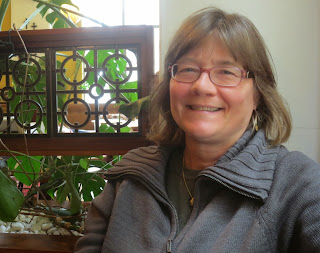 Susan M. Schultz is author, most recently, of Dementia Blog volumes 1 & 2, as well as Memory Cards: 2010-2011 Series, all from Singing Horse Press. She edits and publishes Tinfish Press out of her home office in Kane`ohe, Hawai`i, and blogs here.. She teaches at the University of Hawai`i at Manoa in Honolulu. As a lifelong St. Louis Cardinals baseball fan, she is looking forward to another post-season of happy anxiety with her family.