Something happens but
conceptual irony turns up
in isolation. Not bound by
the authority of content or
obliged by the feudal, subjects
I like resist irony because
irony’s about the rat race.
Trying to talk about contempt,
the self-gratifying bully is
too much of a bad thing. He’s
overmuch and woundy, and
not an authority. To take irony
seriously isn’t possible. It’s not
the story of a sense bearer, or
even the invocation of a figure.
Irony isn’t a dream or an in-joke.
Adapt if you are obliged, but
this is the real Belford, except
the sarcastic authority isn’t mine.

The problem with irony is
it isn’t worth taking seriously.
It’s very something. At first
it carries the whip hand of
authority into the future, then
poses for meaning. This is the
antagonistic argument cranky
men use to explain their hate.
It isn’t fairly accountable and
has nothing useful to say.
I’m the immaterial plural,
a variant best reviewed when
not named, for I am changed
and colourful and unrelated to
the Erl’s of the world. Someday
soon we will come to the end
of the age of irony and it will
no longer be easy to go along
with. This is it. To be for irony is
to surrender to the loss of hope.

There are reasons to be optimistic
rather than the other way around.
Living roots are like eyes in the wild
and are not that different from talking
trees. They are made of signals that
honour light and touch. But a word
of caution: intelligence is biased and
made of memory forms, a series of
successive new tissues taking place,
unfolding in time, and stored on top
of the old. They are unfolding waves
of separate functions, and they flow
through all networks, and all neural
layers while taking different forms,
and do not remain stationary while
cancelling memories of the ongoing,
but keep an eye out to the foregoing
and the wide reading of expressions
that are not in need of explanation. 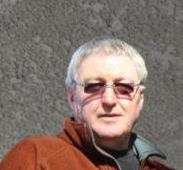 Ken Belford lives in Western Canada; not in Vancouver, not in Calgary, and not in Edmonton, not even on the coast, but in the BC interior, with his remarkable partner, Si. His most recent books are lan(d)guage (Caitlin Press, 2008), decompositions (Talonbooks, 2010), and internodes (Talonbooks, 2013). The poem “the sense bearer,” reproduced here, is from an as-yet unpublished book-length manuscript. He is 68, and still beautiful, still creative, still dangerous.