When the burning started in August, because it kept
its own schedule, it could be early without seeming eager.
On Point Reyes there was fire locking antlers with fire
and the fires at Big Sur had so broad a wingspan
they could soar for miles without flapping.
Inland, by Fresno, a fire slunk through pine wood,
shoulders bobbing piston-like above its back.
Antonio said it might last through December.
I said I wouldn’t be survived, I mean, surprised by it.
In the foothills of the Sierra, long-since blasted
by water from flumes to slurry into sluices,
the fires were simplifying nature down to granite.
The images showed black stumps of chalk fragility,
irrelevant stalks, and coincidental skeletons.
There was a bear skull somewhere, and the thing
about bear skulls is just how narrow they are.
What’s missing is muscle, and there’s so much
missing, you find it hard to comprehend the force
of that jaw. There’s a kind of religion in thinking
about things that have gone away. Take the sun,
for example, stashed away in smoke, its grey
glow cratering the high noon ambiguities, or else
on that florescent Wednesday, a broken yolk
and oozing orange runnily. Temperatures overnight
hit rock bottom and stuck the landing. The fires
kept shovelling scenery into their bellies. I was
reading the poems in which love is a horseman,
spurring with fire and bridling with ice. California
was burning. I was glad I packed sweaters. 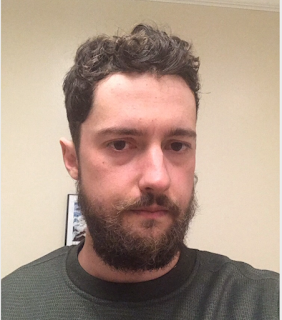 Joseph Kidney has published poems in Arc, Vallum, Oberon, The Fiddlehead, The New Quarterly, PRISM, and Al-Araby Al-Jadeed (in Arabic translation). He won the Short Grain Contest from Grain, and The Young Buck Poetry Prize (now the Foster Poetry Prize) from CV2 for the best poem submitted by an author under 35. He was shortlisted for the Bedford International Poetry Award, Arc’s Poem of the Year, and The Malahat Review's Far Horizons contest. Originally from New Westminster, BC, he is currently completing a PhD in early modern drama at Stanford University. His chapbook Terra Firma, Pharma Sea is available from Anstruther Press.