Akin to neither a wen,
to an octopus, to cancer, to Hell,
nor to a crystal, satisfying a pattern
mysteriously preordained, the city
may instead be conceived as a novel
but natural phenomenon arising not
from the clash of tectonic plates
nor the erosion that shapes their forms,
but by economic circumstance:

A mountainous landscape
of skyscrapers, tenements,
department stores and office blocks
heaving majestically out of the earth
in response to irresistible forces
only to be just as inevitably worn
down to rubble by the incessant passage
of the wheels of trucks and taxis,
by the feet of messengers,
policemen, shoppers and commuters.

We cannot vouch for the geologic
accuracy of this comparison,
yet admire its cosmic quality. 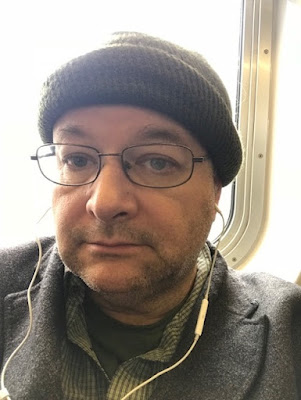 Franklin Bruno is a writer and musician, born and raised in Southern California’s Inland Empire, and now based in Jackson Heights, Queens. He is the author of The Accordion Repertoire (poetry, Edge Books) and Armed Forces (music criticism, in Continuum/Bloomsbury’s 33 1/3 series). His poetry, criticism, and scholarly writing have appeared in Brooklyn Rail, Oxford American, The Village Voice, Popular Music and Society, Paideuma, and Critical Quarterly. Since the 1990s, he has released 20 albums of original music as one-third of Nothing Painted Blue, under his own name, and (currently) as frontman of The Human Hearts. Collaborative projects include writing, recording, or performing with John Darnielle of the Mountain Goats, Jenny Toomey, Laura Cantrell, and the Schramms. He holds a Ph.D in Philosophy from UCLA, and has taught at Northwestern University, Bard College, and SUNY Purchase.