Self: What elsse. A tourist truth. Essence’s excuse. Every being really a becoming and every thee secretly a three in disguise like dikes undone and water unwalled yet skyborne and salted besides, and what’s more becoming before my verity eyes in an unseemly light awash in night behind every blink and witless inner wink and hints of skyfire flints fine enough to seem and sign besides. A gape a ghasp a gash begutted anyou into n’ aplueu to stitch the carnvas of self, chaste with stain and taint of tinted time left unchecked to rot anew and duly undo while Zeus says refuse, Promethean chaingangs notwithstanding, deliberating the shape of our shoreless shadows in the wings while Icarus is already in flight, suddenly ablush at crimson beginnings just beyond the rim and ashamed that he can’t remember the start, so fuck the state of prior art, the blessed prime blunder and fatherless falter, the initial initials no numbers to follow, a tribute to overturned overtured ovaries overeasy around the ashes of firebirds that failed to fly at last, aghast but for a second, as though that makes a differance. Self an else an orbit round itself like bits or mits or cyclic hips, a weirdly wired weary sphere mirrored inside and sumhow alight at night in sightmareish sun and sign sublime. A slick usurpant spillinter of itself. A thing so ghast as to think. A thing of dawns in the dark and liquilight fire within its vairy hone hinner retire. A makeshift echo and righteous deluge of beautiful clash upon the watery night inside and out, for form is font two, meaning a matter of letters as well. Redsalt cleave of dawn, the sun, a fothers ghost offcenter, offenter, offender, themother, who sent her, wherehamhigh, meatcrest crux deluxe, esse luxus relictus. We are each our own fathers from the second second on, tinkled pink through time, forned intwo form from dark heartless drums and the forking of our mums, from roads and handled tools, the foregotten fools of our faltered fathers, like godless good or some old dogs tricks and sacred stolen sticks. Essence cursed again, and in cursive too. 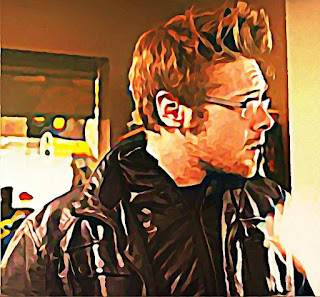 Franco Cortese is an experimental poet living in Thorold, Ontario with his son, Maverick, and wife, Brittany May. His work has appeared or is forthcoming in Canadian Literature, The Capilano Review, filling Station, ditch, and others. His recent chapbooks include aeiou (No Press, 2018), uoiea (above/ground press, 2019) and teksker (Simulacrum Press, forthcoming). He also has leaflets, booklets and nanopamphlets published or forthcoming through The Blasted Tree, Penteract Press, and Spacecraft Press. His work has been published both within Canada and internationally, most recently in the anthology Concrete and Constraint (Penteract Press 2018).