At last I saw the center of my way—
I-5 in Orland, solo to Bellingham,
thin sundown rays re-routed by the visor.
“The count’s 3-1. It’s Alvarez the closer,
Scott warming up, the stretch, foul ball, Brigham
almost had that ... motions for time ... and why
Little’s going with Alvarez, right-hander
here in the eighth, facing the fat of the order ...
Martinez—broken bat—hoofs it to first,
Hunt stays at third, we’re at three all, two out,
Fletcher on deck ...” Guava striplings, blue clods
and two-by-fours between the rows, soy past
the ridge. “First-pitch blooper to the left-field corner—
error by the cut-off man—throw’s late—Hunt’s under—”

I loved your room, and you when you were there.
Light through the buckthorns, your furnishings “Eugene”:
day-bed, door-curtains, quilt with embroidered bees.
Its smell you called “the spirit of the place”
and a mouse came in and out, just as it pleased.
Ought I divide my life into its phases?
Generic boy—corduroy overalls—
a lazy eye—the Quartier Latin—
it blends together. Lying about cocaine.
May and September snow in the Corvair,
static, then utter white between the bands.
A year or so of gumption (20), gall
and TV (21), and others’ faces ....
My soul, such that it was, could not be pleased.

My Schwinn banana-seat cruiser, fire-truck-
red, with a broken bell and dragging fender,
a basket for two six-packs and my keys—
party at Jake’s to celebrate ... the end.
A cigarette reduced to pin-prick ember,
the punk in a bolo tie, about whose band
I’d heard it said—“they fuck you forty ways,
they’re loud. They smell.” I slid off the pedals
and walked through the dandelions. Inside was Jake
laughing with Tim (back from his “stay” in Boulder)
who gave Sally his smooth soft palm, on the shoulder.
Bill G., a solid cube of musk cologne,
switched off “When the Levee Breaks” and put on Beck.
“With your front teeth? Surely it isn’t done—”

“Hel called on acid, she was up in Maine,
crawling among the lichens ... so she said.”
Sally, who’d cut her hair, flicked back her head
and nearly spilled what Schlitz of mine remained ...
11:30, 2, and Vertigo,
summer way back in a warehouse in the Mission,
the suede couch on the porch lost in the snow,
“a broadside misprint—look at the bottom—‘connexion,’
she never knew.” Two chords seduce the creek,
a G and a D, the first a soft enclosure
like a nylon tent, the latter the couple inside.
Shannon lies down in her robe and stays awake,
having seen the brook through which the boy will wade,
asleep. And a pick-up stalls in the windless pasture. 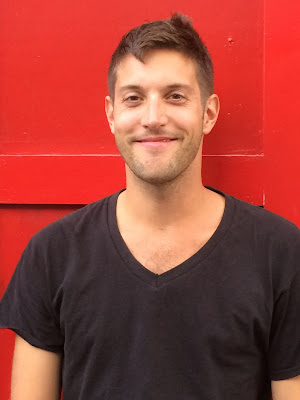 Christian Schlegel is writing a dissertation on the poet Donald Justice. His first book, Honest James, was published by The Song Cave in 2015. Born and raised in Berks County, Pennsylvania, he lives in Providence.