Barely alive (or standing) in the low grass of updates

Fort-nine deaths, feeding a future baby with my present breast

I’m told this is common; I am quiet, smudged grey amid racket

between neighborhood birds and the full tilt of quickening

What is the feeling of a trap without its trappings

The scale of sadness shrinks small as a sentence

Let us now leave tragedy and move to foolishness

where we can better file ourselves

on the planet of passion, bullet-red and apologizing after

Metaphorical light strikes. The mythical warrior can kill or rescue

The horn can gore or the laborer shoulders a wheel

And where in the sky is the mother disguised

as animal or brutalist, as flight or equinox or map

In this sequence, I am rooted in the land

of ponds. The harvest lover, a guardian of granaries

Still, TV shudders. A faint stream of dust and gas

the black scowl of night seemed to rebuke me

My family is a pulse that can quit

Yet where should I go?

I can promise the full melt

of my golden fleece into a song to keep alive by

or lend us to a good wind

The word is a place to wander but never

be abandoned. In the word, not lucky

but sprawled on planks of an actual boat

From the moss, I think this is Washington

Note how little I periled

though my real arms tangle before you

Yet I planned nothing, and considered nothing

I wake up sick about the beauty of Medea

whose bad fate will never breed a namesake

Blood: does it curdle? Can it spoil before birth?—

a candle guttering to waste in the socket

So often the child is the event, his mother, simple

in her limit, just breathing, just attending graves like a ghost

If I’m honest, the main mode of

communication is memory or maybe telepathy

an electric and uneven ground

I speak to the city as a density or lush current

I can visit, step in and step out

If it’s beautiful, I’ve made it so

to my imagination, to its gilded cornice and inimitable difference

Something as common as a dwelling goes up while we sleep

We could use a great deal more frankness. For example:

it is both miraculous and mundane to build a person—

I departed on the strength of this outline

I sip a glance at the plants on the sill

and in these final days feel proud like an unglamorous emperor 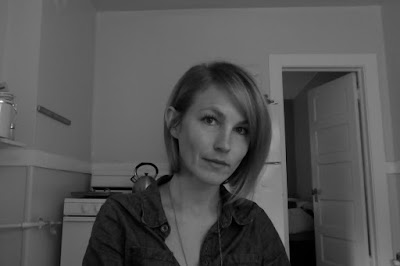 Sara Renee Marshall comes from the Arizona desert and Colorado's high plains. She holds a degree in Political Science and an MFA in Poetry, both from University of Colorado. She is the author of a chapbook, Affectionately We Call This The House (Brave Men Press). Her writing has appeared in Interrupture, Octopus, jubilat, OmniVerse, Everyday Genius, Colorado Review, and elsewhere. Sara is pursuing a PhD at University of Georgia. With Thomas and Rosa Bernadette, Sara lives, teaches, and writes in Athens, Ga.