looks like Queen Anne's lace
but taller, its common names

imported as an ornamental
to northern United States

into southern Ontario, flourishing
along roadsides and streams

the juice of this plant brings
skin blisters and blindness 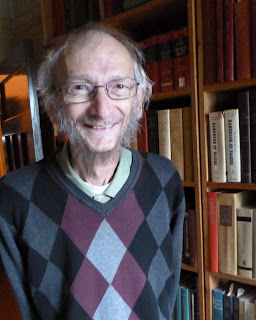 Nelson Ball’s most recent poetry book is Some Mornings (Mansfield Press, 2014). An online chapbook of his poems, A Rattle of Spring Frogs, appears on the website of Hamilton Arts & Letters. Chapbooks in 2015 include Small Waterways (Apt. 9 Press), All and Everything (Laurel Reed Books) and This Close to Being a Tree (Stone The Crows! Press). Nelson and his late wife and soulmate, artist and writer Barbara Caruso, are the subjects of Nelson Ball & Barbara Caruso / Home Project / A Photo Documentary, a video created by Catherine Stevenson. The video can be viewed on YouTube.