With asura hath woman a hoarder of giddy tomes
breached locs. cut mouthy and ill-fitting
where dizzy sign’s makeover  re-phrased
with asura
hath woman a tainted parody of her arched will
harpies, floosies
where origin receiveth massage
and the shallow is intrajected by phissin’,
with asura
seeth woman’s vagabond zigzag, her errs and kinky lines
écriture is made to injure and to live in
and it is made to be salient with slurry quixotics
with asura, slink against the naughty denouement,
is thy cred ever more than stalwart gags
is thy misreading daring as precipice,
with mounting treats, strong flavours
with asura the lines grow thick
with asura is curled re-creations
where woman can mine, re-sited for indwelling.
Sewn scattered, coated with
fever ripped by her ludic moor
WITH ASURA
A wooly complex of meerkats
heaped bling, the domain of asura
Asura is an amorous terain, asura
A bonny kneading of the monad’s flan
and steeped with the spinner’s cunning. Perky borrowings
gamed by asura
Ducky kudos gamed by asura
A Pappardelle fracas of swanny bells; by asura
And salsa columns tainted
Gamed by asura, gelled relics, alcoves; came ambrosial phonemes,
Came the kitch of recast stains signs: altered phrases
By asura sauntering trophy memes
By asura, scented hilarity,
Asura wresteth the va-jazzled
It wresteth the rift and the riffing grafts and
It gnaweth the thread of all that blooms
It burneth to weave bold patterns;
A sewer of hottie contours by asura; crammed with moist avoidance, embroiled
Memory fingering Asemia
Asura sleuths, shouldered by whim
And chafes like hungry masks, recruiting
It hath brought pulsing to breed, rife
battling the languerous grid and the bridled gloom
COUNTER RANT: TWIRLY
wrought with horstext for Elusive
Courses a re-set banquet
all beset with asura. 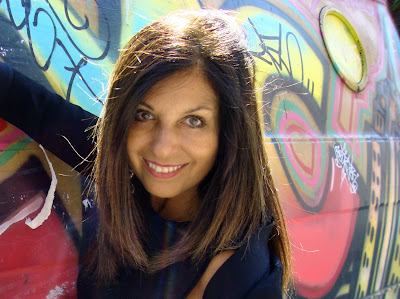 Adeena Karasick is a poet, cultural theorist, media artist and the critically acclaimed author of seven books of poetry and poetic theory. She is currently Professor of Pop Culture and Media Theory at Fordham University in New York. Writing at the intersection of Conceptualism and neo-Fluxus performatics, her urban, Jewish feminist mashups have been described as “electricity in language” (Nicole Brossard) and noted for its “cross-fertilization of punning and knowing, theatre and theory” (Charles Bernstein) "a twined virtuosity of mind and ear which leaves the reader deliciously lost in Karasick's signature “syllabic labyrinth” (Craig Dworkin).

I have no idea what this poem means, I am not up on my Buddha. Guess that's not important for a work of a "critically (extremely fragile?) acclaimed author"

That's not true there was no comment. At least say there was one comment that was rejected and on what grounds.