what do zombies with Bavarian accents have in common with country music (sung on tape, long after the funeral)?

But not being dead – there’s a diff between decay in the ground and decay that makes your skin shine, unbathed and unbedded.

no chiseled wood pole
no greying bullet
no salted bones
no hand-carved talisman, or ornamental cross, or papal water decanting the TV

where do you take your body when you’re no longer heading in the direction of zero? When you’re getting further and farther from the final destination? When you identify more than one letter between rather and father. When skating might preserve handwriting. When you slip in (and so get away with slipping on) a banana peel. When funny isn’t die. When you do sleep, but only with your eyelids, not your whole body. When you expect a homoerotic amulet at the end.

Now a hope-line, dispensing lollipops, stretches past luck and up the escalator

Zombies do breathe, but it’s more recycling than refreshing.

a history of troy – sh, don’t wake the dead

a trying tie a limp tie a torn limp a zip, torn from the lip of a B&W graveyard, cue the yellow balloons

I have mem on my mind, minus the mammory
scarab to meet you

oftentimes, Zombies had been committed to a vegetarian
– some even vegan –
diet in their former lives

is a boat-dock, plunged vertical into the earth, still phallic?

middle-age mayhem, perhaps. Or a sailor’s cravat, at half-mast,

no has-been
no hassle-free
no halfway house
no hablo
n-a-b-l-a, in earnest

because of that tying off, trying out, tie-breaker, and this B-unsung beaker. A pupil, set in stone, in your gold orifice

more of a speckled cure for chrysoprase insomnia than an on-spec heartache for healing invisibility. You still don’t believe me, Jacqueline? Compassionate fertility invites vegan love. We looked him up in the book under “the Great-comma-Alexander”

we named the relapse a thief’s companion
ahmost 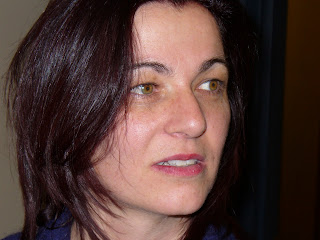 Nicole Markotić is a novelist, critic, and poet. Her seven books include three of poetry: Connect the Dots and Minotaurs & Other Alphabets (Wolsak & Wynn), and Bent at the Spine (BookThug), two novels: Yellow Pages (Red Deer Press) and Scrapbook of My Years as a Zealot (Arsenal Press), an edited collection of poetry by Dennis Cooley: By Word of Mouth (Wilfrid Laurier University Press), and a co-edited (with Sally Chivers) anthology of essays concerning representations of disability, The Problem Body: Projecting Disability on Film (Ohio State UP). As well, she has numerous publications in literary journals in Canada, the USA, Australia, and Europe. She edits the chapbook series, Wrinkle Press, and has worked as a book editor for various presses, recently joining the NeWest literary board as one of its fiction editors. Currently, Nicole Markotić is Professor of English Literature, Creative Writing, and Disability Studies at the University of Windsor.