White noise pruned into a dirge
for the mid-fifteenth—who’d’ve thought
mere fleas could wreak such havoc? —
wringing salt from the living dead. Gaudy
hats adorn hubris beyond the moment of biting
the hibiscus and tumbling into a dark space.
Crack open a tomb and “hibiscus”
pops out, not dust or colourless green,
though “bite the plague” comes close.
Easier to toast aborted branches
than to flaunt choice: spin or twirl?
All frequencies of vibration or everlasting
reverb of industrial punk? Another dawn
fizzles into night, spawning earth after earth
orbiting funereal suns. 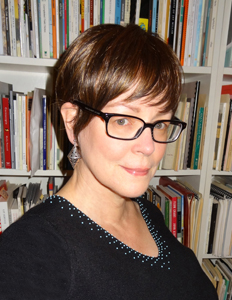 Canadian poet Camille Martin is the author of Looms (2012), Sonnets (2010), Codes of Public Sleep (2007), and Sesame Kiosk (2001).  She recently completed a manuscript of minimalist poems entitled R Is the Artichoke of Rose. The poem is from Blueshift Road, a work-in-progress.