Who knew a canoe?
Who found a forest?
Came around a cape
with a tanker
spilt it
“over my dead body”
promises we
we defend we
are ulterior
and avowed

World,
macaroni and glue
fibrous web—
test the edge of sincerity
I like you
and the sun comes up
one side of you
in small streams
just beyond suburbs

Come close
where we made you up, OK?
we’re ready
the gluing of shapes onto
surface
though the kids are alright
and the world’s
sometimes a defensible idea

because
these waters
is a shell of
ravens 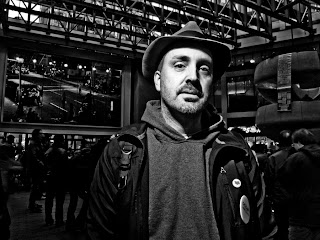 Stephen Collis is an award winning poet and professor of contemporary literature at Simon Fraser University. His poetry books include Anarchive (New Star 2005), The Commons (Talon Books 2008), On the Material (Talon Books 2010—awarded the BC Book Prize for Poetry), and To the Barricades (Talon Books 2013). He has also written two books of criticism, including Phyllis Webb and the Common Good (Talon Books 2007), and a novel, The Red Album (BookThug 2013). His collection of essays on the Occupy movement, Dispatches from the Occupation (Talon Books 2012), is a philosophical meditation on activist tactics, social movements, and change.